Roof Crafters LLC started out as a construction and real estate business in 1991. They did anything from rehabbing and remodeling homes to getting their hands dirty in the muck and mire of digging ponds and building roads. When the economy came to a screeching halt, it became much harder to get their clients the financing they needed, so they transitioned into strictly doing roofs. "We were doing so many houses and we already had crews. So it just made sense to morph into something that was based around construction of homes and so we went into the roofing industry.” says Chuck Magee, Owner of Roof Crafters.

The transition in 2011 to strictly doing roofs came with a lot of frustration. After dealing with messy job sites due to all the rain in the Baton Rouge area, Chuck invested in his first Equipter RB4000. The minute he saw the Equipter RB4000 he thought, “This is it! This is the answer to all of it.” Within 60 days of seeing the RB4000, Chuck had his very first one on the ground. So what led Chuck to supply an Equipter RB4000 to each of his 4 crews?

Chuck says that the first thing he noticed about the Equipter RB4000 was the tremendous production value. “Instead of finishing jobs at dark, we were finishing jobs an hour to an hour and a half prior to dark.” He began to look at how many more houses he was doing in a month, in a week—and realized that they were picking up an average of 5 extra houses a week. When you begin to look at those extra five houses per week at the end of the month, or even at the end of the year, that's big. That’s an average of 20 extra houses a month.

The clients of Roof Crafters are thrilled when the crew pulls up to their house with the Equipter RB4000. They have the assurance that their flowerbeds, bushes, and gardens won’t get trampled. When people are watching the crews out there with the RB4000, they see quality. They see a job being done professionally. Their salesmen get jobs from merely having the RB4000 on the jobsite. “You can’t figure out the VALUE of the machine when you're out selling anywhere from a $10,000-$30,000 roof, and you’re nailing it because you have that piece of equipment on the ground,” says Chuck.

Since the purchase of their first Equipter RB4000 Roof Crafters' sales have increased in nearly every way. It’s hard to put a value on a client going with your team instead of someone cheaper because they know you’ve got the right kind of equipment. 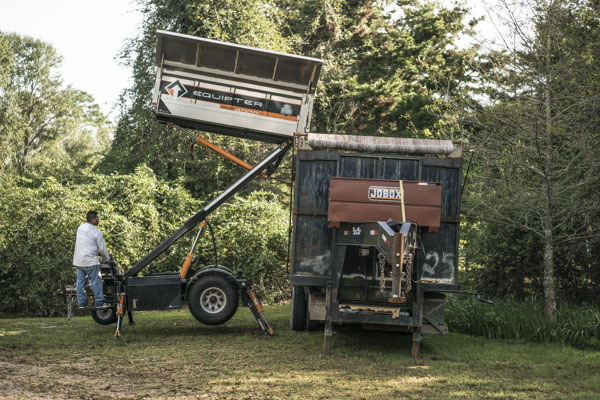 When they know that you are the most efficient crew they could find, when they know that they won’t be finding debris in their yards for weeks to come, when they know you’ve decreased your cleanup time by nearly 80% in the easiest way possible, when your clients begin to see the value that lies behind your team and in your top-notch equipment and materials, it’s not just about how much they’re paying, it’s about them knowing that they’ve got the best team out there working on their roof.

“It’s staring you right in the face and it’s so strong when you’re signing contracts when you have that guy that comes in with 4 contracts and he tells you that they love the Equipter so much that all 4 of them signed up this afternoon. On a cul de sac road.”

Using the Equipter RB4000, Roof Crafters have seen amazing increases in almost every aspect of their company, from sales to production to referrals. From the first moment Chuck Magee saw the RB4000, he knew that one piece of equipment would revolutionize his business.

Want to try the Equipter RB4000 out for yourself? Click below to find the closest rental location to you now.